The Undead Liche Lord Kemal riding to battle on Pameshirshem, an animated chariot of bone. Originating from ancient lands Lord Kemal has maintained his existence through a stubborn quest for perfection in the mastery of dark arts, and will stop at nothing to further his abilities. 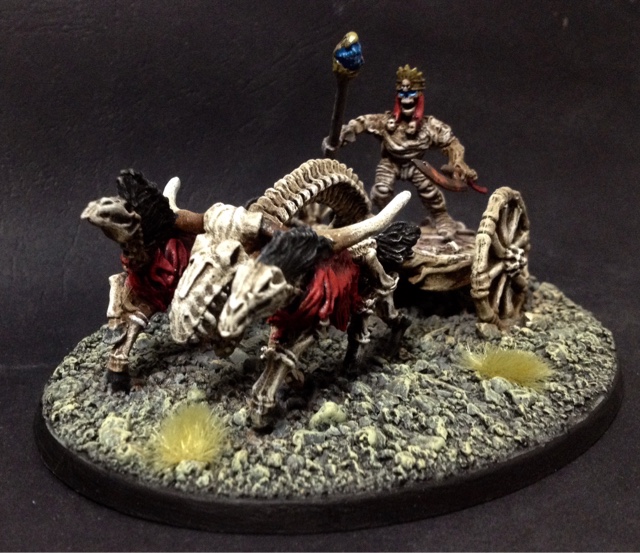 This is the old undead chariot from the 1991 skeleton war machines range, released alongside the skreaming skull catapults.

The rider that I have converted is not part of the original set, as those chaps are all currently performing duties elsewhere (either in the grave guard or the skeleton warriors units, or as a necromancer in Morbius' case). But he is not glued to the chariot, which conveniently had a groove in it like a big slotta-base for a miniature tag to fit into. So I can remove him and sit another model there if I feel the need. He is based on an old metal citadel mummy, with plastic tomb king parts added to make him look a little more regal.

I painted the model up in the same manner as the rest of my other old lead undead, with plenty of browns to make them look rusty and old, and a splash or red and black to break up the brown-ness.

The picture below was meant to represent the last view of some poor victim as they are run down by skeletal steeds as they are chopped up by a skeletal maw after being flayed alive by ancient majiks. But instead it says "Look at the moldline!" Sigh. 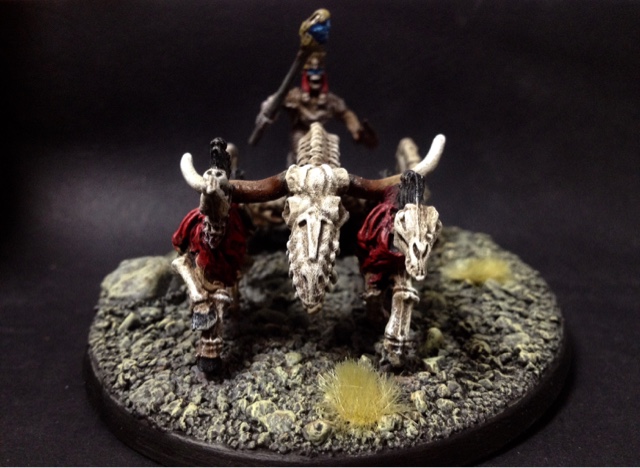 The gold parts were painted in the same manner as Murillo, The Dread King, with a fairly subdued gold to make it look like it had been around for a while, and probably needed a clean.

The staff itself is a banner pole, with a bit of quartz glued on the end. I put a bit of greenstuff on there as well, as I was worried it might fall off. I deliberately made it look like it had been fairly roughly fashioned, wanting it to look like a primitive artefact that was old even when Kemal acquired it in his youth.
I'm not sure that works, so I might change it later for something else, but for now it will do the job. 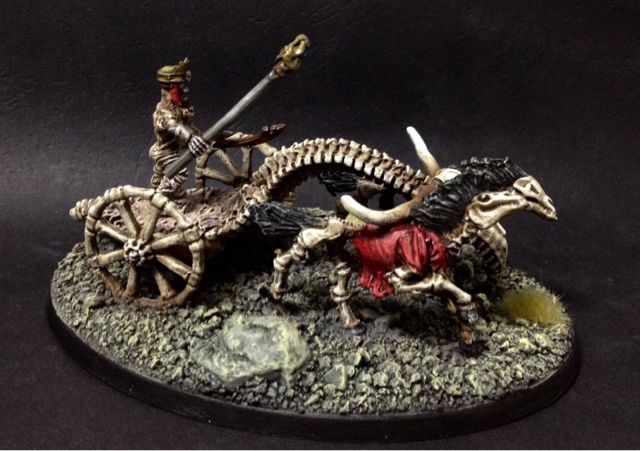 I plan to use this model as Arkhan the Black on Age of Sigmar games, who can cruise around casting Curse of Years on anyone who comes too close.
In WHFB 3rd Edition I can use it as an Undead Chariot, cruising around causing fear  and running into things for a bargain 88 points.
So this model should be good fun to use, makes a nice centrepiece, and will be a valuable addition to my army.