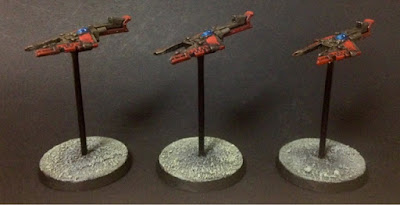 I was sitting around one day looking at a small pile of old eldar grav tanks, and my chaos army with zero air support, and BAM! the Plastic-Eldar-Grav-Tank-to-Hellblade-Fighter (TM) conversion concept was born!
A short while later, after a flurry of chopping, a bit of super glue and a healthy dose of swearing, and these three fighters were added to the black hole that is my painting production line.

Fast forward the better part of a decade, and they are finally complete!
The process to make them went something like this: 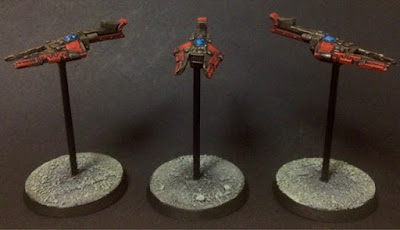 I think the tails are a little bit too chunky, so in the future I might experiment with some different options. I'm thinking perhaps a piece of sprue shaved down to an "almost-point" at the end, with a little raised strip glued on top might be a better option.
The tails on these ones might represent an uparmoured experimental design, or some sort of variant that gets abstracted out in the 6mm rules. 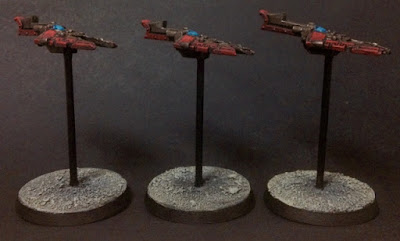 I painted them in a fairly generic "chaosy red" scheme so I can use them in most of my chaos armies. They should look equally at home alongside the Plague marines and the titans of Legio Mortis. 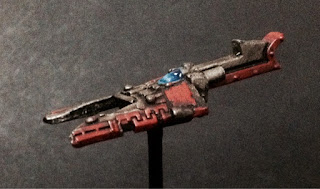 In the canon I'm not sure exactly when Hellblades enter the timeline, but I'm hoping that it is at some time in the age of darkness, so I can use them alongside my Death Guard Legion and Titan Legio. They are derived from the Traitor forgeworld of Xana II and I don't think it's too unreasonable to have a few prototypes alongside the traitor armies later in the heresy, given Xana's secretive and undisclosed technology, and the fact that they were known to have provided "stranger and more savage war machines in the heresy's later years". So I'll do up a few more of these and add them to the mix.
But for now, job done!
Posted by Fixxxer at 14:39