Ever wondered what happens when you cross pollinate Epic Armageddon with the Age of Sigmar General's Handbook?
I hadn't either. And then I did.
And this happened: 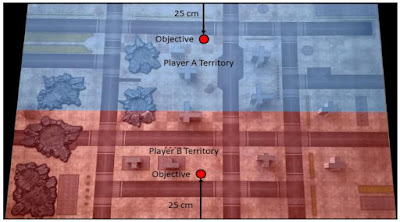 I was sitting around one day, probably intoxicated on a plane, and was thinking about how the lists that are developed for Epic Armageddon are all play tested for the one scenario. This leads to a certain emphasis on some things, and a tendency for other things to almost never be taken. The up side, of course, is that it is fairly easy to keep things reasonably balanced.

An example of this are upgrades like hellhounds for Imperial Guard companies. In Imperial Guard lists (well, most of them) you can only take hellhounds by attaching them to already fairly large companies. However, there are real advantages in not upgrading your companies too much, as it means you can take more smaller formations, that are cheap. By having many formations, rather than fewer larger formations, there are advantages as you can activate your smaller ones first, see what your opponent is up to, and then activate your larger ones. These are then set up to deliver a coup de grace later that turn or first up in the next turn, and you can have more control over the flow of the battle. But this means that your hellhounds stay on the shelf more often than not. This lack of upgrades means that many lists taken to tournaments look quite similar, and certain formations are deemed as "sub-par" as they aren't well suited to certain aspects of the scenario. Potentially you might end up with the actual army list building process being tainted by this philosophy and the situation becomes even more ingrained.

Another example is that the victory conditions in the scenario are the same for every game. With one of these the formation that is worth the most points yields one victory point when destroyed. So you try not to upgrade certain formations, such as the one that contains your army commander, so they aren't the one your opponent targets. That way if you do lose your most powerful unit and concede a victory point you at least (probably) still have your supreme commander running around somewhere, boosting the rest of the army. This isn't necessarily a bad thing mind you, but it does encourage the Supreme Commander's formation to usually be devoid of upgrades, which isn't very fitting of a Supreme Commander's formation (in my opinion at least!).

Around the same time that I was thinking about these sorts of things I bought the Genreal's Handbook for Age of Sigmar. I had a read through the scenarios in it, and liked how balanced they were, but more importantly how they encouraged army builds to be more varied. Then the idea dawned on me that they could be adapted to Epic Armageddon fairly simply, and would help to overcome some of the issues that I had identified.

So here is a document listing the scenarios adapted for games of Epic Armageddon.
I'll do a bit of a rundown here on what I've done in this document, and how I think it helps Epic Armageddon.

First off, points values. Most games of Epic are played at 3000 points. Mainly because that's about 2-3 hours for competent players. But by including the three different sized games here it helps to remind people that you don't have to just play 3000 points all the time.

I was also thinking about adding some limitations to the armies selected based on the size of the game; like limiting certain types of units or whatever. But in the end I decided not to as that is covered quite well by the lists that have been made. It might be something that needs adding in at a later date though.

Just some general comments on how big the battlefield should be and how much terrain should be on there for a reasonably balanced game. Nothing too special to see here. Moving on...

Whoa, hang on a minute! I can re-roll to hit with my "insert formation of doom here" for an entire turn! So shooting and support! Plus if they are Engaged! Breaking the game here a bit? Well possibly, but what this does is encourage people building their army to not wring out every last point on trying to squeeze in one more formation to get their activation count up. Instead they can run a list at 2,925 points, keeping whatever upgrades they wanted to take, and potentially get one of these bonuses. Previously they might have dropped an upgrade and bought another formation of sentinels. The triumphs are potentially powerful, but are one use only and as they are random are a little harder to build your list around.

The scenario selection is random, so when selecting an army you don't really know what you will be trying to achieve. Personally I think this is a better approach than tailoring your army to suit five set known objectives. 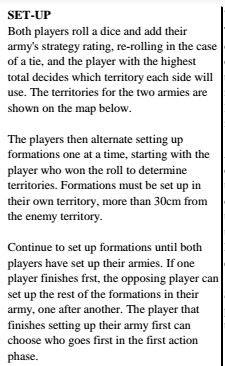 Most scenarios have setup conditions like this. Another thing to encourage less activations is that the player who finishes deployment first gets to choose who activates first. This can be important for armies with a low strategy rating, as it is unlikely they will get that option again later on in the game.

If they choose to go first or second is situational, as there are pro's and cons. If you have less activations to begin with, and you choose to go first, then you are compounding the problem of being out-activated. But at least you can shoot with those nine manticores before the thunderhawk full of terminators shows up and ruins their day. So the option is there at least. These are the victory conditions for the first scenario. They are all subtly different, with emphasis on different things. This one encourages multiple stands and vehicles breaking their opponent. So a single fearless commissar can't hold that objective when the boyz have him surrounded. But in other missions that places emphasis on other things, like heroic last stands, he can.
As the scenarios are random, and the victory conditions are all different and require different things, what you end up with is an army that needs to be diverse as it may be up against anything.

So that is the crux of what the document has, and the reasoning behind why I think it will work for Epic Armageddon games. I think the Games Workshop team have done a great job in coming up with these balanced scenarios for Age of Sigmar games, and have obviously invested a lot of time and thought(and some input from the top tournament players and organisers) into them. I look forward to giving them a go in Epic games soon.
Posted by Fixxxer at 16:38